After retiring from the U.S. Navy, Tami King began working for her fellow veterans as Gillespie County Veterans Service Officer (VSO) in March 2007. Since then, Disability Compensation and Pension awards to Gillespie County veterans have increased by over $7.2 million, from $ 4,436,000 in 2007 to $ 11,645,000 as of September 2019. Accredited by the Texas Veterans Commission, King coordinates outreach events and participates in her community, visiting civic organizations and assisted living facilities, to connect with veterans and encourage them to claim the benefits they have earned.

In addition to her usual VSO duties of assisting around 3,000 Gillespie County veterans, their dependents and surviving spouses with VA Claims, King has created and coordinated community events commemorating veterans of various eras. This includes driving the fundraising efforts to make such events successful.

Examples of these events include coordinating two community Honor Flights for 41 WWII Veterans, 5 Korean War Veterans and 18 Vietnam Veterans; a 70th Battle of the Bulge anniversary honoring eight WWII Veterans in Dec 2014; a WWI Centennial event in 2018; a War Memorial Monument Expansion, establishing an annual Memorial Day flag placing on veteran graves and Fredericksburg’s Veterans Day Parade. In creating and coordinating such commemorative events for veterans, King raised over $138,000 to fund them.

She’s even reached out internationally to have the French Ambassador award the French Legion of Honor to 10 WWII veterans at a ceremony in Fredericksburg.

King is a member of multiple veterans organizations, serving in leadership roles. This includes founding the Veterans Council of Gillespie County in April 2015, for which she serves as Chairman. Major projects of the Council include creating the Gillespie County Honor Guard in June 2016 and war memorial moment expansion in 2015.

King has worked beyond her county to assist neighboring Kerr and Kendall counties to establish full time County Veterans Service Officer positions. She also worked to increase service from her own Gillespie County office with the addition of an assistant VSO in 2019.

Her community spirit, benevolence and humanitarianism has been recognized by civic groups. This Masonic Grand Lodge of Texas presented her their highest honor bestowed on a non-Mason, the W. B. and Brandon Carrell Humanitarian Award. Further, she received the Military Order of the World Wars Bronze Patrick Henry Medallion Patriotism Award in 2018 and in 2019 was honored as the Fredericksburg Chamber of Commerce Outstanding Public Servant.

All of King’s outstanding service to veterans and community was honored by the TVC in December 2020 with the presentation to her of the TVC 2020 Excellence Award.

Pictured are Tami King and her Excellence Award. 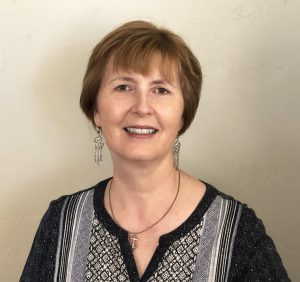 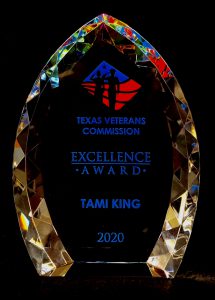