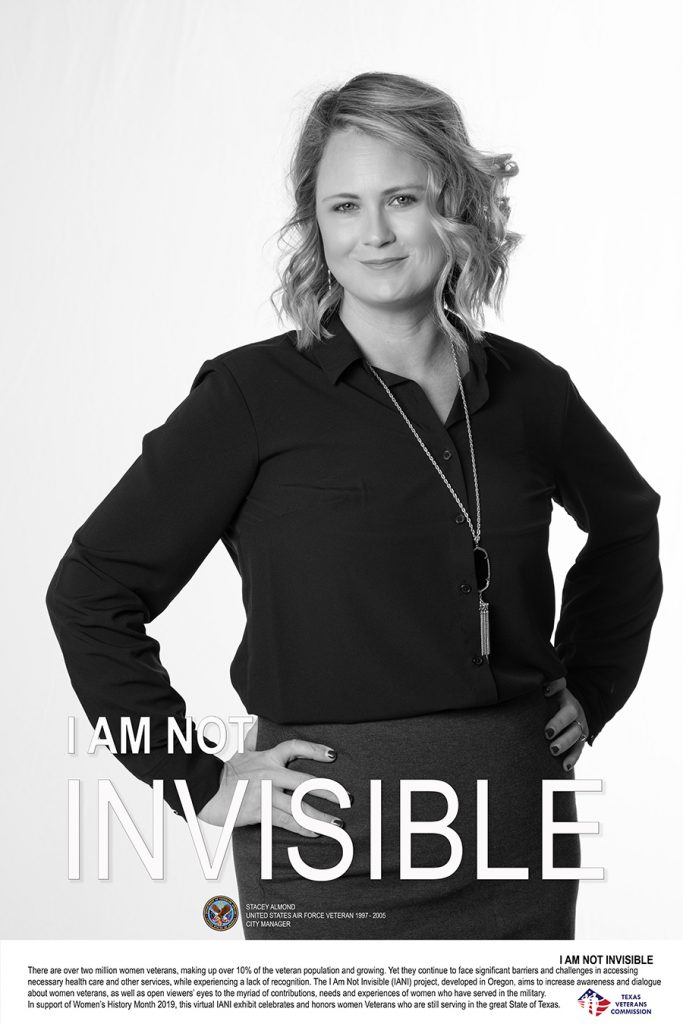 Stacey grew up in Southern Illinois and after graduating high school joined the United States Air Force. During her career in the Air Force she served in Colorado Springs, Colorado, Cheyenne, Wyoming, and Las Vegas, Nevada. Stacey deployed on several occasions to Saudi Arabia, Kuwait, and the United Arab Emirates. After eight years on active duty Stacey decided to separate from the Air Force.

Having witnessed the tragedy of September 11th and deploying in support of Operation Iraqi Freedom, Stacey knows the importance of service on the local level. Intrigued by local government and wanting to continue serving her community, Stacey sought to complete her education with the assistance of the Post 9/11 GI Bill. Stacey received her BA in Political Science and went on the complete her Master in Public Administration (MPA), with the goal of working in City Management.

Stacey has served in the capacity of Assistant to the City Manager, Town Administrator and her current role as the City Manager for the City of Lake Worth. Honoring and serving the Veteran community is a top priority to Stacey as well. She coordinated the Veteran Citizen of the Year Award which celebrates veterans who have worked to contribute to the vitality and sustainability of the community. She also participated on the ICMA Task Force which developed a Veterans Handbook that aids veterans during their transition from active duty to civilian life. The handbook was designed to assist both officer and enlisted providing a path to a career in local government.

Stacey has been married to her husband Daniel (an Air Force veteran as well) for 17 years. They have three beautiful girls, Libby age 16, Faith age 12, and Cadence age 9. In her spare-time she enjoys travelling, history, and thrift shopping.