The honor of meeting Ms. Dow occurred for Texas Veterans Commission (TVC) Veteran Career Advisors Durashia Frizzell (Navy veteran), Karen Casey (Army veteran), and Marlene Reifenberger (Army Veteran) while they were forming the Women Veterans of the Coastal Bend, a veterans support and service group. “She was our Honorary Attendee and participated in many of the local Veterans events after that time,” said Reifenberger.

“I would encourage any girl to join the Marine Corps,” said Dow. It’s a, not only is it a great experience, but you’re serving your country, and I’ll never forget it, it will always be the biggest part of my life.” 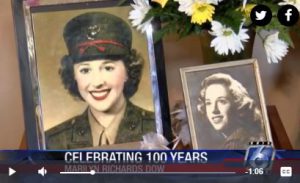 Watch an interview with Dow from KRIS 6 News in Corpus Christi.

Born Marilyn Richards in 1921 in Chicago, Illinois, she was working as a teletypist for a telephone company when she decided she wanted to support the war effort and join the military. Her father served in the Army during World War I, but he encouraged her to join the U.S. Marine Corps as it was expanding accepting women into duties other than clerical.  Dow enlisted in 1943. During her first year of service, she worked in confidential communications, sending and receiving coded messages for the base commander.  After a year working there, she met her future husband, Marine Sergeant Dwight Dow.

“I met my husband, that’s the most important; I didn’t win the war, but I won my husband,” said Dow.

The Women Veterans of the Coastal Bend still stay in contact with Dow.

“It would be interesting to sit and have a cup of coffee with Marilyn and hear her stories,” said Laurie Pimentel – Johnson, Texas Veterans Commission (TVC), Veterans Employment Services, South Texas District Outreach Coordinator and Army veteran. 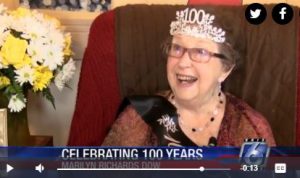