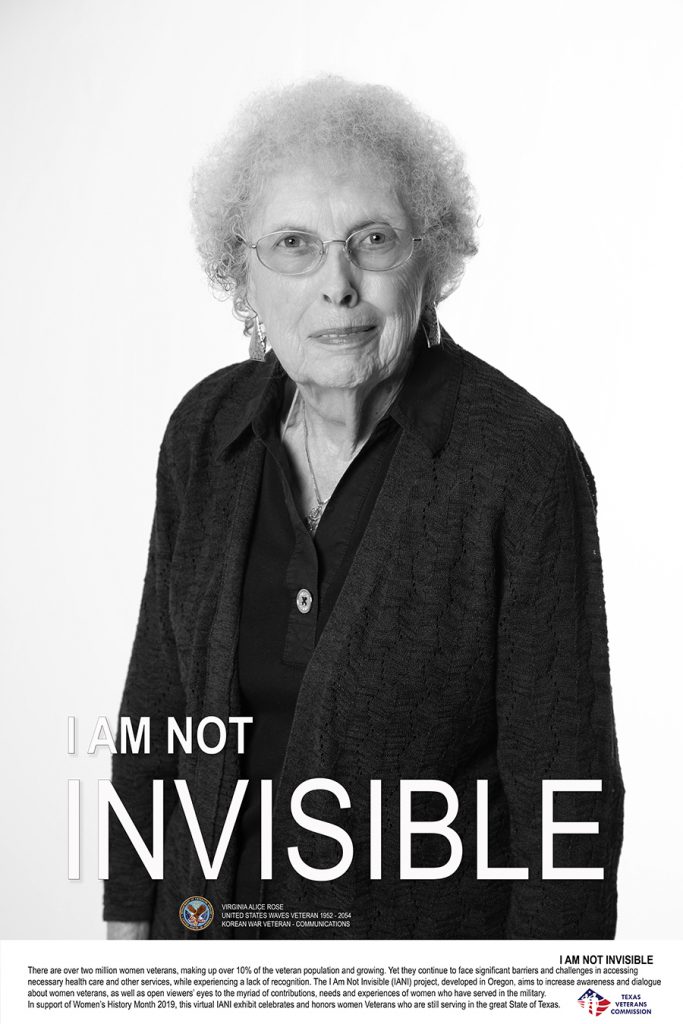 I was born and raised in Toledo, Ohio, but I dreamed of traveling and seeing the world.  And, in each generation, my family has served in the Armed Forces.  A friend and I planned to enlist together, while returning from a trip to NY, the Korean Conflict broke out and my friend enlisted without me.  In 1952, I enlisted in the WAVES.  It was really my only choice, since I wore navy blue all the time.

I went to boot camp in Bainbridge, Maryland, where I met my husband, Bill, in the chow line on Veterans’ Day while attending Telemann’s school.   We double dated – each with someone else—later switching partners and ultimately, both couples married.

My first duty station was at Headquarters of the 9th Naval District, Great Lakes, Il. My captain had been a WWII prisoner of war and I was proud to have served in his command.  Women at that time were not allowed on ships or in combat, so my duties included arranging background investigations.  I was also a member of the WAVE drill team, performing at the Michigan State Fair and other events.  My heart still skips a beat when I hear a good Sousa march! My children and grandchildren have marched across many a living room.

A large family was what I had always wanted, and the Navy gave me one with many friendships.   I am still in contact with a WAVE that I served with.

At the time I served, women could not transfer duty stations to be with military husbands.  Therefore, I wasn’t able to retire on my own enlistment, though it seemed as if I retired with my husband in 1974.  Raising children in foreign countries in those days was, at times, a challenge. How do you buy pants and shirts long enough to clothe a 6’4’ teen while living in northern Japan?  Montgomery Wards and Sears to the rescue! They were the original Amazon!

Our experience was much different than military families today since we didn’t have the internet or the ability to pick up a phone other than MARS (Military Auxiliary Radio System) to call the states. This experience brought us even closer as a family and we learned to appreciate the things we did have, the opportunities we were given, and the perspective we gained interacting with different people and cultures.   Although not active duty, my children and I were good representatives of America while supporting my husband during his time in service.  We participated in various outreach opportunities – including scouting programs with international troops, choirs who shared music with local schools, old folks’ centers and sporting events with local schools.  My son eventually also enlisted in the Navy and served in Desert Shield / Desert Storm before he retired.

I knew nothing of the “I’m not invisible program” when I arrived at the photo shoot.  Listening to stories the others told of their service to their country made me proud to be considered part of this program.