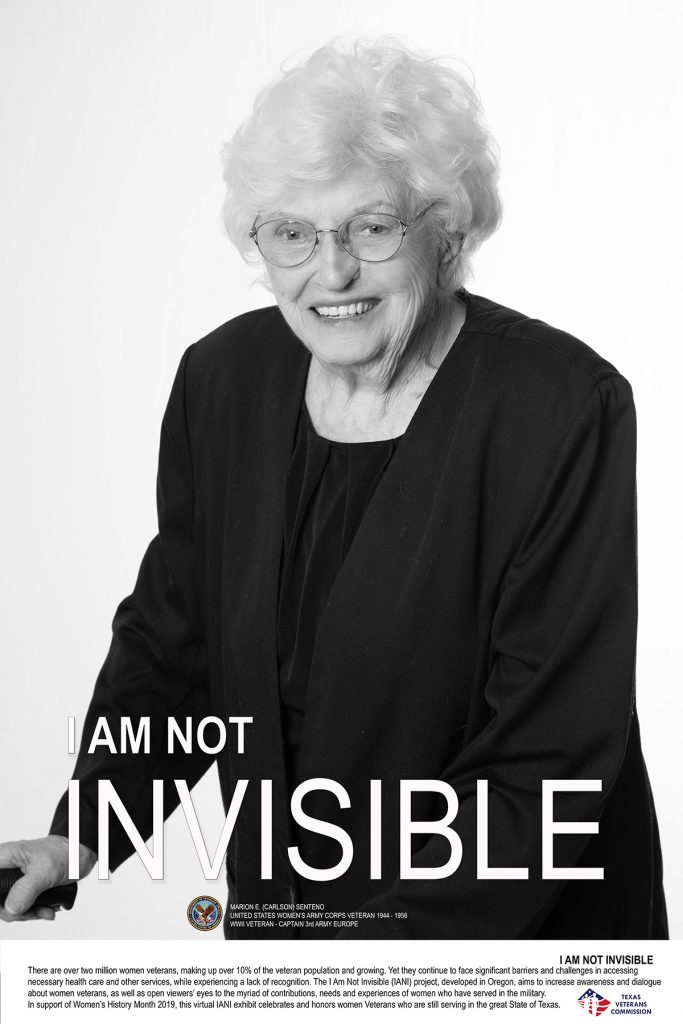 June 1944 I was 20.  One of my sisters was a Navy nurse in the Pacific theatre, and another was a WAVE in Washington, DC.  With my parent’s consent I enlisted in the Women’s Army Corp at Ft. Snelling, MN.

Basic Training was at Ft. Des Moines, Iowa where guard duty for woman was done with a whistle and a flashlight.  My first assignment in Atlantic City, N.J., was to return wounded troops to recovery hospitals near their hometowns. My desk was in an auditorium where the first Miss America was held. It was now filled with guns, planes, and other military supplies. We were housed in empty hotels where only the men could use the main elevators.  WAC’s had to use the freight elevators!

In 1946 I went to Indiantown Gap Military Reservation, PA where I was secretary to the commanding general.  I played on the WAC basketball team where they called me “Stonewall” because if anyone hit me they’d fall down. We won the regional championship!

I was then sent to Ft. Meade, MD before going to Europe on the USAT Bridgeport.  The trip took ten days and I published a daily paper on the ship.  I arrived in Bremerhaven Germany to open air barracks where even the ten blankets issued didn’t keep out the cold.  In Heidelberg I was Acting First Sergeant of a 75-woman WAC detachment.  We lived in an old SS Kaserne (barracks) with no hot water.  There I wrote and published recruiting pamphlets for men to re-up.

I applied to OCS in Seckenheim and was in the first class of woman officers in Europe.  After being commissioned as a 2nd Lt. 3rd Army, I traveled Vienna.  I was the only officer allowed on the WAC softball team and in 1947 we won the European Championship!

That year I conducted cemetery dedications and had the privilege of attending dinner and cocktail parties with Italian royalty.  When senators and representatives from the US would come, we were assigned to stop questions and conversations that were deemed inappropriate for the post war climate.

I returned to the US in 1948, serving in the reserves as 1st LT, and attended Sergeants College of PE in Boston on the GI Bill.  In 1949 I transferred to Millsaps College in Jackson, MS. where I received my BS in Psychology.  I was recalled to active duty and was assigned to recruiting in Atlanta GA, and in Miami FL, I had a ½ hour radio show playing music and recruiting.

At Florida Military Headquarters in Jacksonville, I was a personal affairs officer. Later, in Atlanta, I became the Company Commander of WAC 3rd Army Headquarters.  Before leaving the service in 1957 to start a family, I was detailed to the Army Chemical Center in MD and promoted to Captain 3rd Army Chief of Industrial Security.