“All VCSOs (Veteran County Service Officers) have success stories. It’s the veteran we don’t get through to their benefits or have challenges with that we should focus on,” said Sabine County Veteran Service Officer and Navy veteran Thomas “Shorty” Warren.

And succeed he does, as exemplified by a WWII veteran who was assigned to Howitzer unit in Austria. “He came to me wanting hearing aids. We got him hearing aids and also $600 per month and $78,000 back pay,” said Warren.

He also points out the importance of service records for family members as well as for veterans themselves.

“I tell all veterans to log their DD214 with the county clerk. Invariably you’ll look for it years later and can’t find it. I also give my veterans a list of things to keep in a safe so that spouses can find it or help them. Too often we have veterans who are dying and whose widows don’t have the documents they need.”

He reaches out and gets community support for veterans as well. “Through citizen donations via several collection jars placed in businesses throughout the county, we’ve been able to provide personal hygiene items, eating utensils & food, even a tank of gas or two for a few Veterans who fell upon hard times,” said Warren. “Also, for some of our veterans in our two nursing home facilities in Sabine County, I have been able to provide them with patriotic t-shirts, caps, sox, and personal small throw style blankets during Christmas or Patriotic holidays.

In true “Shorty” style, he posted an open letter to his community, thanking them for their support, informing them of how the donations helped and relaying the veterans and their families’ sincere gratitude.

He reaches out to community youth too as well as an organizer of the Patriots Club for Hemphill High School.

Pictured are the flags for Memorial Day and displays Warren provides for the Sabine County Courthouse. 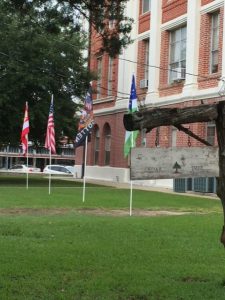 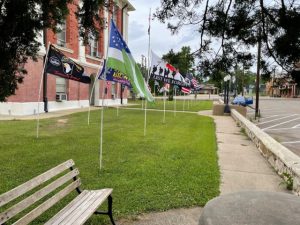 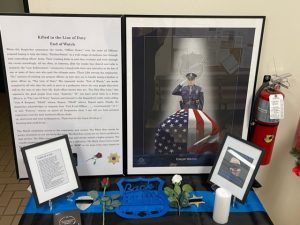 Warren was in the Navy on active duty from 1969 to 1980. Most of his service was in the Mediterranean on two aircraft carriers, the USS Saratoga and USS Forestall, teaching helicopter rescues and water survival. Additionally, he taught water survival at Naval Air Station Jacksonville. Towards the end of his Navy career, he served as an MP in Bermuda.

He is currently the Commander of the local American Legion Post, which just re-opened in early May 2021.

Warren says he has had the “Honor and privilege” of serving veterans in Sabine and surrounding counties since 2015. “I retired from Law Enforcement in 2006. After doing odd jobs, including being a substitute teacher for five years, I became (Sabine) VSO.”

Veterans wanting to contact Warren, or those wishing to help support Sabine County veterans can find him at Sabine VSO. http://www.co.sabine.tx.us/page/sabine.Veterans

As for being known as Shorty, “Everybody calls me Shorty, I don’t know why I’m five – two.” 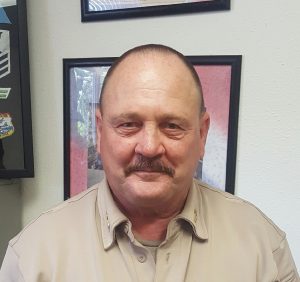