On September 15, 2022, the Texas Veteran Commission (TVC) recognized State Representatives Richard Peña Raymond and Ray Lopez for their consistent, strong support and advocacy on veteran issues throughout their years of service. 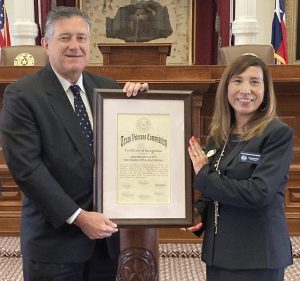 Representative Raymond was named as the Chairman of the Defense and Veterans Affairs Committee in 2021. He has authored and supported legislation relating to the confidentiality of veterans’ information and disaster preparedness for military installations which have yet to pass. Additionally, he co-authored the bill which created a new Navy SEAL license plate. Pictured from left are Raymond & TVC Commissioner and Army veteran Mary Dale.

Raymond is from Laredo, represents House District 42 and was first elected to the House of Representatives in 1992. 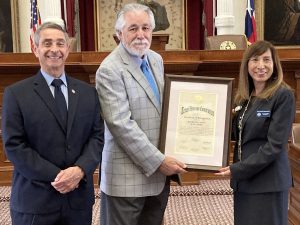 Pictured from left are TVC Executive Director and Army veteran Thomas Palladino, Representative Lopez & TVC Commissioner and Army veteran Mary Dale. Lopez is an Army veteran and served 14 years in the Army Reserve. He is a member of the Defense and Veterans Affairs Committee. Lopez’s energy industry program bill for veteran employment was passed in the last session. He sponsored State Senator Donna Campbell’s bill to allow 100% property deduction for a surviving spouse of a service member who is killed in the line of duty. This was approved by voters as a constitutional amendment in November 2021. Additionally, Lopez has authored and supported legislation to provide grants funding pro-bono services for veterans which has yet to pass. Lopez is from San Antonio and represents House District 12. He was first elected to the House of Representatives in 2018. 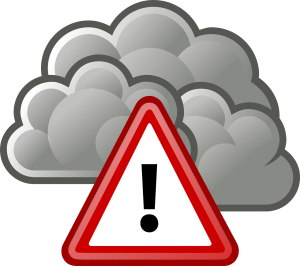