HomeMediaRamping up help for a veteran

Ramping up help for a veteran

John Singleton left his family farm to join the U.S. Army in 1964 and became a member of Airborne. In 1965, he was deployed to Vietnam.

Now, 55 years later, Singleton is at home in Guadelupe County with his family and raises chickens in his yard for fresh eggs. As he has limited mobility which affects how far and long he can walk, Singleton uses a wheelchair. His house needed modifications including ramps and handrails in the bathroom to increase his comfort and mobility, and decrease his need for assistance.

After the usual channels did not get all the ramps and modifications properly installed, Singleton began calling for help. Eventually, calling his Texas State Senator, Donna Campbell. From there, Singleton’s needs were brought to the attention of the Texas Veterans Commission and TVC in turn contacted its partners at the local Military Veteran Peer Network (MVPN). Specifically, Robin Cooke, MVPN Assistant Peer Service Coordinator at the Hill Country MHDD (Mental Health & Development Disability) Center in New Braunfels.

Cooke, retired US Army veteran, told others in her network of Singleton’s need for a ramp and handrails, including a Veterans Treatment Court mentor who posted the need on Facebook.

Enter Eric Pawlak, a member of a New Braunfels area veterans group, who came across the need while on his group’s Facebook page.

“As soon as I saw that need, I said let’s get it done,” said Pawlak, a handy man by trade as owner and operator of the fitness machine repair company Alamo Fitness Solutions in New Braunfels.

Pawlak was at Singleton’s home in just a few days. The needed supplies were paid for by MVPN Hill Country MHDD.

“He’s (Pawlak) an absolutely nice guy. He’s been outstanding,” said Singleton regarding Pawlak. “And Robin, she’s been very helpful. They got on top of it really quick.”

By early October, the modifications were completed.

Adding the ramp at doors and handrails in the restroom gives Singleton more mobility and allows him to live more independently. This in turn has improved the well-being of his family, for example it allows his wife to come and go more freely and visit relatives. And, Singleton can more easily attend to his chickens.

Pictured are the ramp and handrails installed in Singleton’s home. Thresholds can prevent wheelchair access and improper ramps can be dangerous causing heavy wheelchairs to flip onto the user. “If I hit it with my wheelchair it, the ramp would fall,” explained Singleton about his previous ramp. 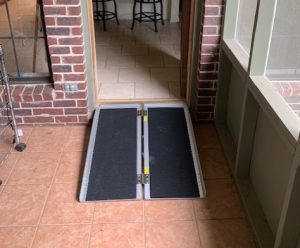