Freddy Salazar served in the Marine Corps from 2005-2009. After he left the service, he was married and had two daughters. “Due to some mental health conditions and drug and alcohol use, I lost it all,” said Salazar. In 2012, he separated from his wife and was homeless.

“I was on the streets with 3 shirts, pants and shoes. I was in a shelter home for over 3 weeks while working for the Army National Guard Bureau. At that time in my life I was dealing with mental health issues, drugs and alcohol and I had no resources. I pushed through and continued working while still in a shelter home.”

In the summer of 2014, Salazar moved to Houston, just 5 hours from his hometown of Edinburg, Texas. “A good friend helped me and pushed me to go do a claim. I was introduced to a Texas Veterans Commission (TVC) Claims advisor who assisted me with a disability claim. It was the best thing I ever did. In May of 2015 I was awarded service connection disability compensation. I learned of different programs in the community to help veterans and vowed to learn as much as I can to help those veterans who may be going through what I did with no resources.”

“I moved back to my hometown in the summer of 2016 and struggled to find suitable employment,” said Salazar. Salazar met with TVC Rural Veteran Career Advisor Gerardo “Jerry” Garza to assist him in finding employment. About a year later, in August 2017, Salazar interviewed for a position with TVC’s Health Care Advocacy Program (HCAP) and was offered the job. He started in September 2017 as a Health Care Advocate (HCA), a position he holds to this day.

“I am grateful for the opportunity Jose Silva and Cheri Mastrian (both former TVC HCAP employees) gave me. I have met, learned from and assisted many individuals within TVC and my community. And, Jerry Garza is now my colleague. When he knows about events, he calls me so I can participate in them.”

As a Health Care Advocate, Salazar bridges the gap between the veteran and VA health care system to ensure they receive correct care.

And help he does. “In 3 years as a Health Care Advocate I have completed over 1,700 cases,” said Salazar. He went on to note a particular case. “A veteran was homeless when he arrived at the clinic. I was able to assist him in getting food for him and worked with clinic staff to get the veteran appropriate shoes for his condition. The veteran had shoes that were ripped from the heel area. I also worked with fellow community partners in finding him a permanent place to stay and no longer be on the streets. The veteran was very appreciative in the quality of care I was able to provide and being resourceful.”

Salazar advises veterans to understand that, pending their health issue, they may be eligible for some health care coverage or assistance but not necessarily all. “Reach out to your health care advocate in your region and see how we may be of service to you and improve the quality of care you received at your VA facility.”

Beyond his job as an HCA, Salazar volunteers as a member of the Hidalgo County Veterans Treatment Court panel.

Hidalgo County Veterans Treatment Court Supervisor Eloy Lugo praised Salazar’s efforts in assisting veterans. “He has also personally assisted me; other Veteran Treatment Court panel members; and Vet Court participants with problems and difficulties that have arisen during our services with the VA Clinic. I have observed Freddy to provide exceptional support and service not only to the veterans themselves, but to their family members who are inquiring information for services, or additional benefits that the veteran may qualify for. I have also spoken to other veterans that are, or were probation officers and they fondly remember Freddy stating ‘He’s the one that fixed it for me.’ Freddy epitomizes servant leadership and inspires other panel members to give back or pay it forward.”

“I will always vow to assist my fellow veterans and their families to the best of my ability in hopes they will not experience the hardship I went through,” said Salazar.

Need a Health Care Advocate or know someone who could benefit from HCA assistance? Find them in your area at HCA. 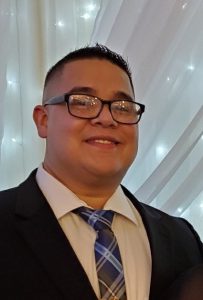